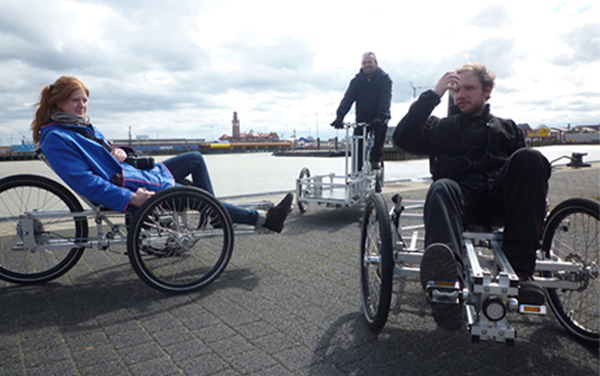 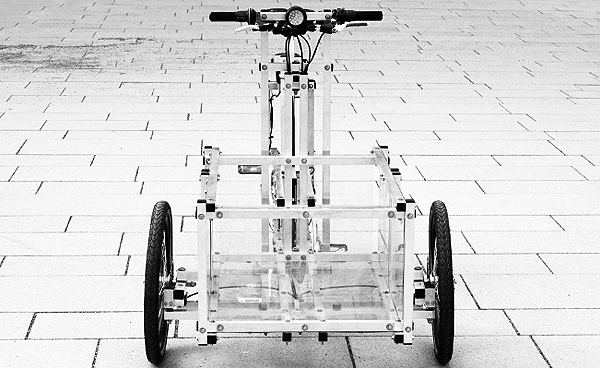 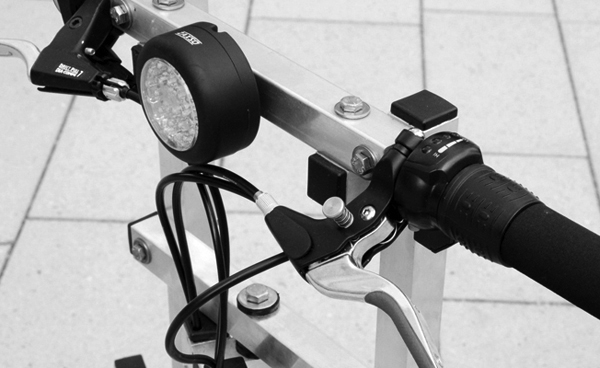 XYZ SPACEFRAME VEHICLES has been developed by N55 in Collaboration with Till Wolfer and is based on XYZ NODES by N55. The frame consists of weather resistant, lightweight, standard aluminum tubes. Unlike the singular load-bearing tube seen in traditional bike structures, the main structure is an orthogonal spaceframe of standard aluminum tubes. A series of tubes of varying lengths are produced, holes are drilled and the frame is assembled using stainless steel bolts, washers and nuts. The assembling requires no welding process. Exposed ends of the tubes are capped with a standard PE plug to avoid sharp ends and to prevent dirt from accumulating inside the tubing. The construction makes it possible to place gear wheels and chains within the frame, away from the users. Instead of using ball bearings for steering parts plastic washers can be used. Whenever needed the tubes are reinforced by inserting POM or PE plugs to prevent the tubes from collapsing. All other mechanical parts, bicycle wheels etc. are standard parts that can be acquired all over the world. 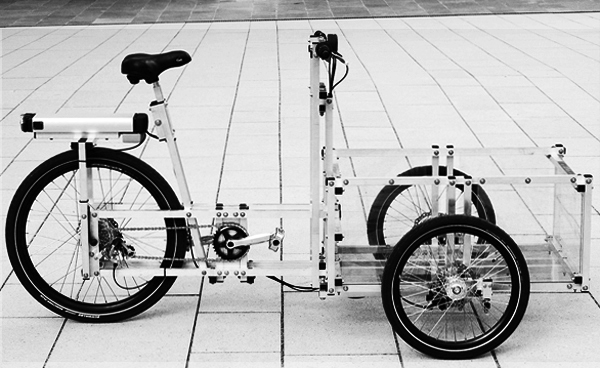 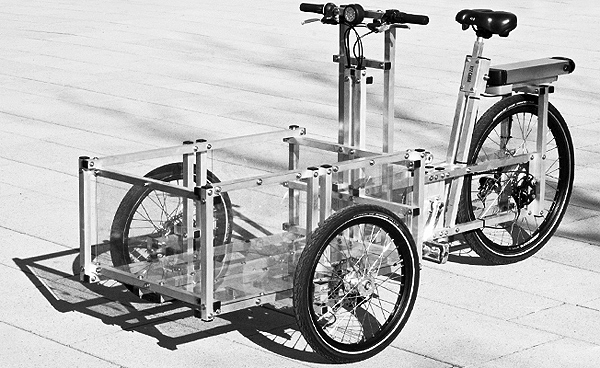 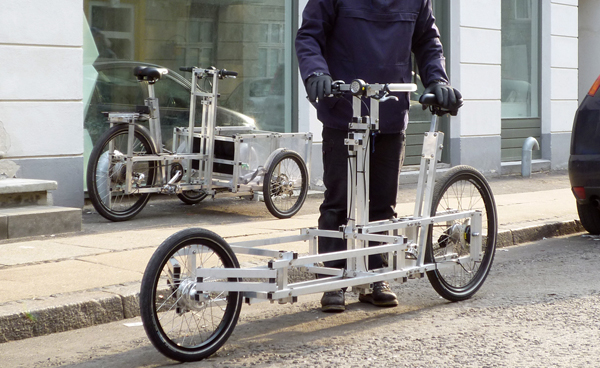 Public spaces in our cities are dominated by dangerously fast, heavy, noisy and polluting cars. The majority of cars are used for transporting one or two persons. The constantly increasing number of cars cause traffic jams and make them inefficient and slow as a means of getting from one point to another in the city. Most cars are using fossil fuels, hereby destroying the environment on our planet with co2 emissions. Our children and we move around in the city constantly risking our lives. The car industry, a large concentration of power with close connections to politicians and decision makers, are now trying to convince us that electrically powered standard cars are the answer to the traffic problems in the world. But the pollution is just moved elsewhere and electrical cars are just as dangerous to persons as traditional cars. Moving 100 or 200 kg's of body weight using a machine that weighs 1000 kg or more is just plain stupid and must be unacceptable from any sane societal point of view. Cars make sense for long distance transport and in rural districts. But in the cities, they are a leftover from less democratic and more brutal times. Before the cars invaded our public space, things and people where transported not only using horsepower, but also a variety of push- carts and large cargo bicycles. Its possible to do that again. Especially combined with intelligent public transportation. Persons could get their daily exercise in a productive way instead of mindless training in time and power consuming fitness centers. N55 proposes that persons reclaim the streets and use them for non polluting, safe, light-weight transport and pedestrians. This would free up large quantities of public space which could be used for cultural purposes, growing food, micro businesses etc. Wide bicycle-lanes should be established to allow for a great diversity in human or small semi-electrical powered vehicles to emerge. There is a tendency that the industry and hereby large concentrations of power prevent us from producing things ourselves. They attempt to gain a monopoly over the delivery of things needed for our everyday lives. There is already an enormous difference in the prices the industry pays for raw materials compared to what an individual person must pay. Because they have an interest in selling as much as possible, the industry provides low quality products that breaks down fast and are being disposed of. Its necessary that persons takes back the control of production of anything from housing to vehicles, make themselves able to repair and produce things by understanding and mastering everyday life technologies. XYZ SPACEFRAME VEHICLES can be seen as an attempt to encourage such behavior. 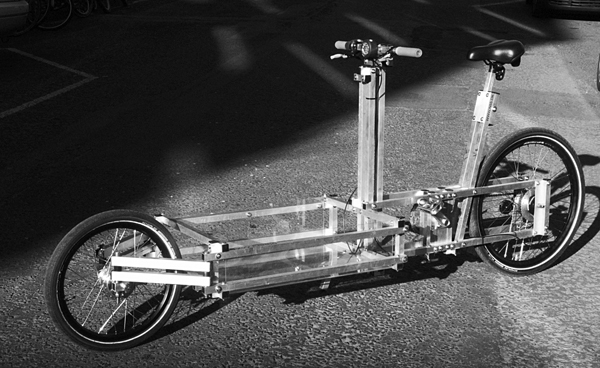 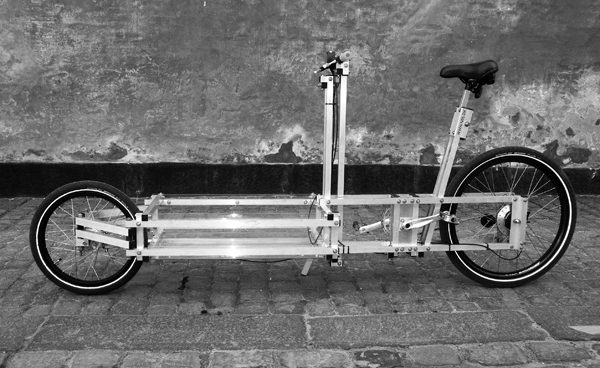 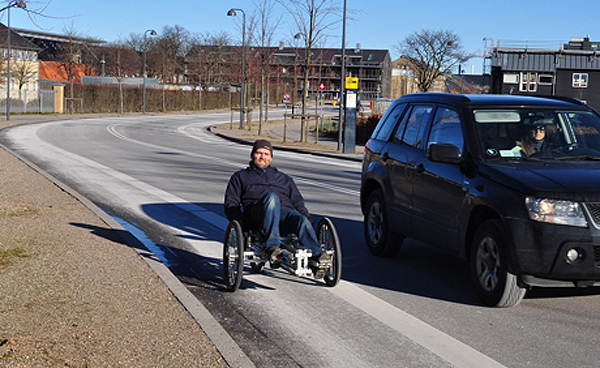 Substituting cars with human powered vehicles would obviously have a vast impact on the worlds CO2 pollution. To produce aluminum requires large amounts of energy and it's production is therefore often situated in close to renewable energy sources, such as hydro-power. However, because of it's low melting point, recycling and remelting aluminum requires much less energy than recycling most other metals. Aluminum is the third most common mineral on Earth and roughly half as strong as steel but weighs a third. So Aluminum has a better weight/ strenght ratio than steel. Because of its unique ability to oxidize fast, it protects its own surface with aluminum oxide and is therefore highly weather-resistant. If the correct alloy is used, no surface treatment involving poisonous compounds is needed. 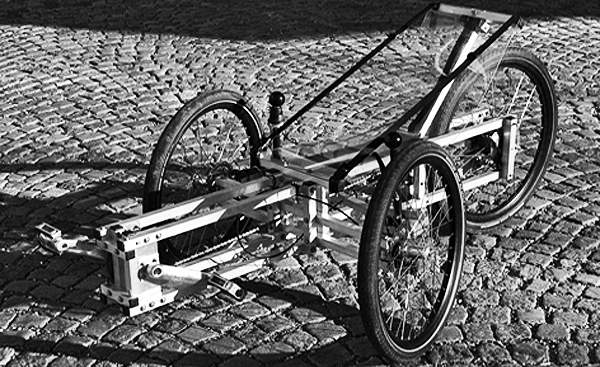 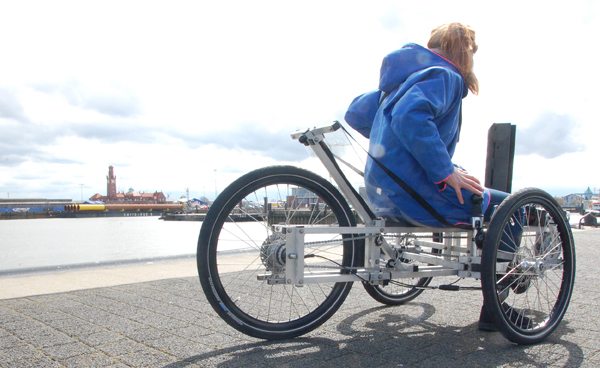 A few years ago, I built an adaptable tandem bike from two abandoned Malvern Star folding bikes. It was made with an "insert" between the halves of a folding bike. The bike was good, but I started thinking of the possibilities of something better or different. My modular bikes are the end result. The bikes are designed from the ground up to be assembled as tandems, recumbents &: load carrying bikes and the aim is to make these specialist bicycles affordable by using a cost-effective modular construction.

The design is patented and this article was featured in the Jan. 2005 issue of Velovision (you can find the patent here, search for 'modular bicycle' to find the patent documents. Pick the top entry you find).

This construction includes standard frame units with extras, like a suspended rear triangle, steering link, rack, trailer and recumbent seat & boom. The frame has attachment points at the ends for holding another frame or extras, a tube that acts as a static handlebar mount, and tubes that can support pulleys for a front-wheel drive mechanism. The seatpost doubles as a mount for the recumbent seat, as do the bottle mount bosses on the top tubes.

I have taken care to ensure that the extra features on the bike don’t look scrappy when unused – for example a plastic plate can fit over the front attachment points. So far there have been 3 designs of the modular bike and I have designed a set of models of the bike which you can make for yourself at home. 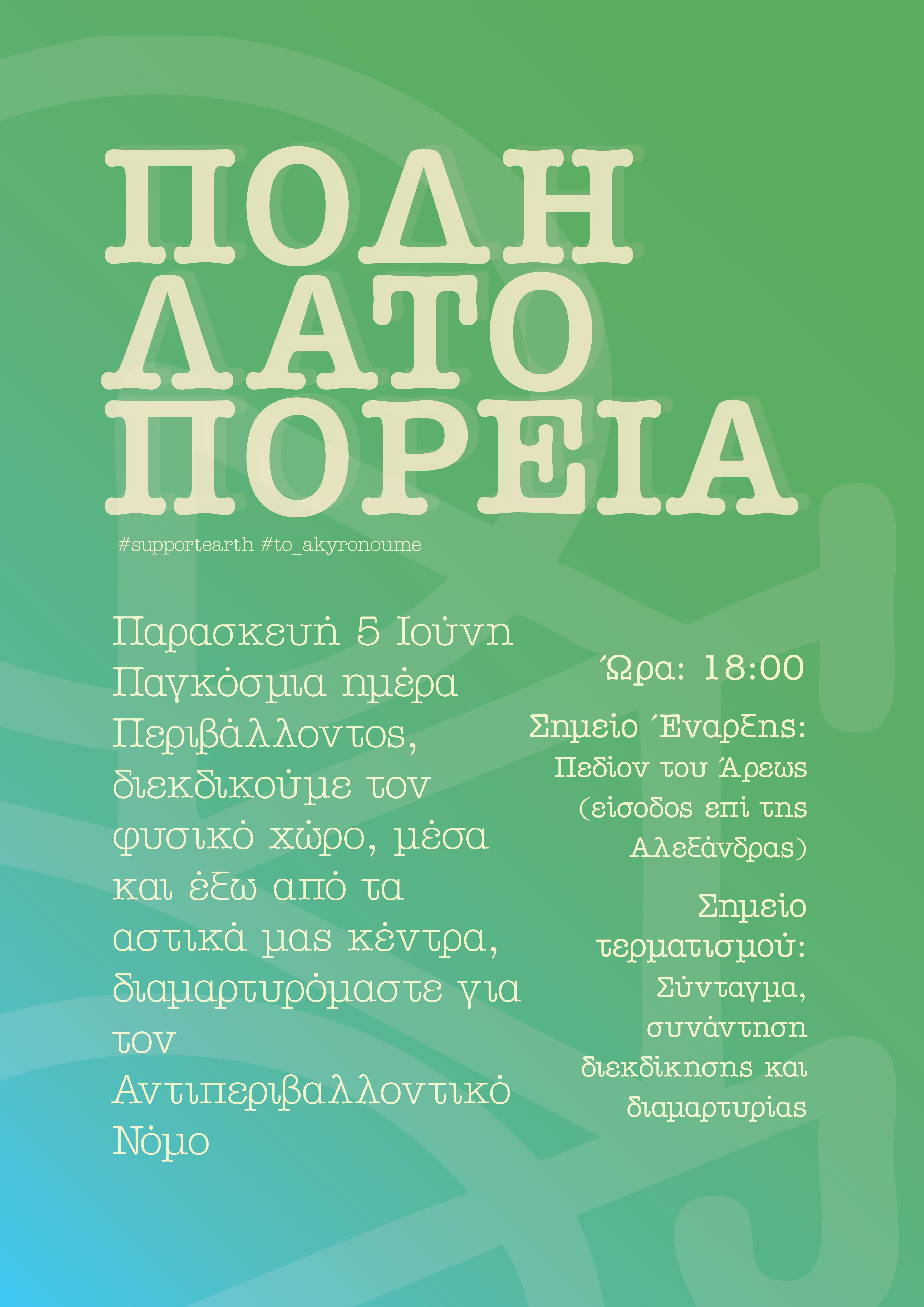